Grants given in the last quarter

Grants given in the previous quarter

Recently we have helped…

The children who come to Claire House have life-limiting or life-threatening conditions and use Claire House in a number of ways; we offer day to day respite allowing parents the chance to re-charge their batteries, as well as meeting more complex needs with medical and bereavement care. We will be using the donation from FFFC towards the rental of oxygen concentrators. These devices are used to provide oxygen to a patient at substantially higher concentrations than available in ambient air. They are a safer, less expensive and more convenient alternative to tanks of compressed oxygen. The use of this equipment is part and parcel of effective symptom management which frees the child to enjoy some of the more fun aspects of Hospice life such as Play and Music Therapy or even being able to relax and enjoy increased mobility in the Hydropool (as pictured). 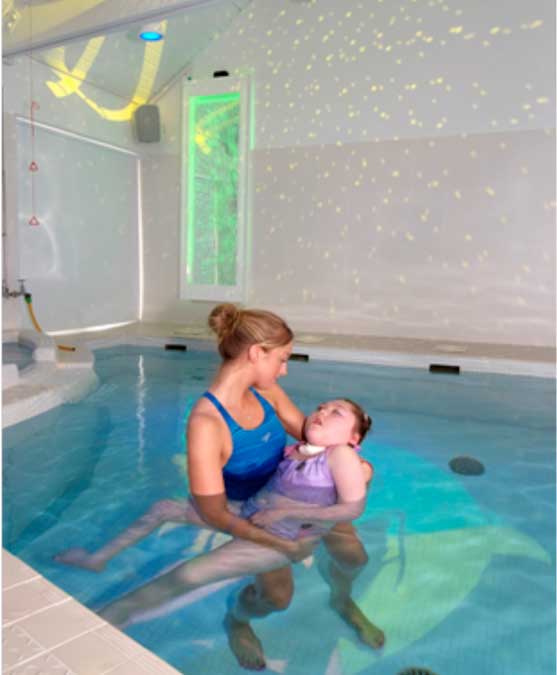 Two of the children could not wait to use the basketball equipment, it was set up with great enthusiasm and the net not yet fixed! Provided from a grant from FFFC. 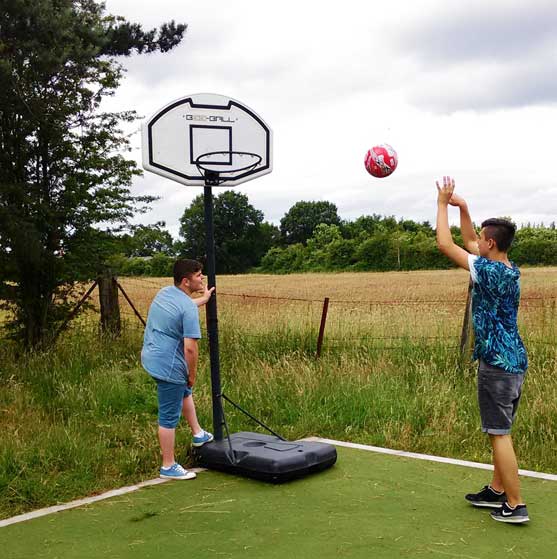 Krafty Kidz is a special service where children and young adults who have experienced the loss of a loved one, or whose family member is terminally ill, can come together and express themselves through various craft activities. Every 2 months, the charity's Bereavement and Support Team host a 'Krafty Kidz' group meeting, a professional support service to give children and young adults chance to talk, ask questions and tell their story to each other. Art and play is important because it lets them convey a whole range of thoughts and feelings they may not want to put into words. It is fun and powerful at the same time. 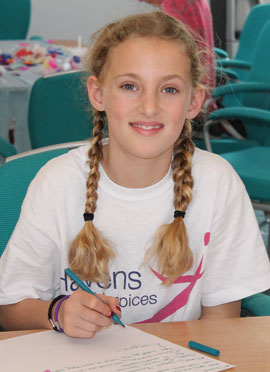 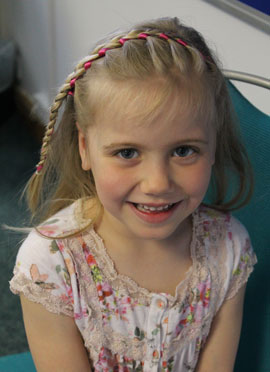 Grace and Georgia tell us how Krafty Kids has helped them:

Grace Cooper, 11
The people at Krafty Kids know what we've been through. It can be awkward talking to my friends about Louis but it's easy talking to the adults here because they helped to look after Louis when he died at Little Havens. There was one lady who always used to look after me and whenever I see her we always chat lots about Louis which is really nice. I was only three so I don't remember much, I just know him from the stories I get told and the pictures I see. A few weeks ago I did a talk to my Girl Guides about Little Havens but it was really hard to say what happened, I don't know if it could have been fixed. At Krafty Kids I can just ask simple questions like what is chemotherapy? It's much easier here. Sometimes, I don't even think about it I just know that I am lucky to be here, to come to this special club. We can talk about our special person if we want to and we do lots of activities like I'd do at home or at school like baking pizza and cakes, and I really enjoy it. You don't even realise sometimes how helpful it is until I get home and think how special it was. I can't just crawl under a parachute somewhere else and talk with lots of other children about Louis and their special person. It's good because everyone feels the same way. Sometimes at school when my friends have fights with their brothers and sisters they say they don't love them but I don't get that, it isn't until you lose them that you realise how much you love someone. It might sound funny but out of something really sad, there is so much happiness here. If Krafty Kids didn't keep running I think it would be a lot harder for children because they wouldn't have anyone to talk to who understand what it's like.

Georgia Elwell, 6
My brother Harry is nearly four but he is very poorly. When he was born I thought everything was going to be fine but it wasn't. He is quite deaf and can only hear if you shout in his ears and he makes little noises instead of talking. I help care for him like helping Mummy give him his medicines or if she isn't available and Harry has a seizure, his head drops and I hold him. It's scary for him. We've been to Little Havens before and it was good at helping Harry settle down and go to sleep. We played in the pool and all the places and had so much fun. I was a bit freaked out about coming to Krafty Kids on my first time, I thought it was going to not be nice but then I changed my mind. My friends don't know Harry's ill so I heard other people talking about their brothers and sisters and we went swimming and I made some nice friends. When I was in the car on the way home I felt happy and now I like to come back.

Clear Sky have been able to buy resources for their Play Therapy room to help children with emotional behavioural difficulties. The donation also contributed to the internal and external refurbishment of their vehicles which has helped them generate some interest, and even donations from people who have seen the Buses and subsequently looked them up on the internet. Pictured below one of the buses (Bertie). 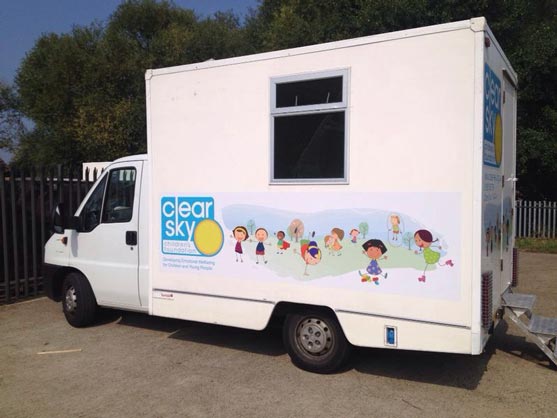 FFFC recently supported the Pelton Youth Project in its work with young people in the County Durham Area. The picture shows just one of the activities funded by the grant from FFFC. 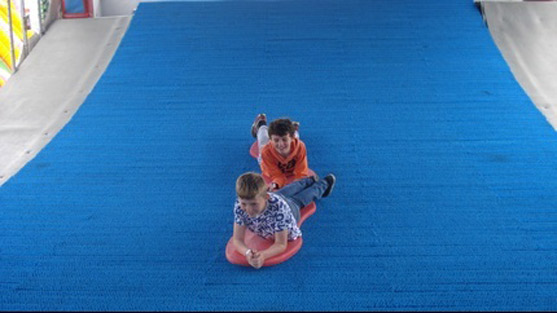 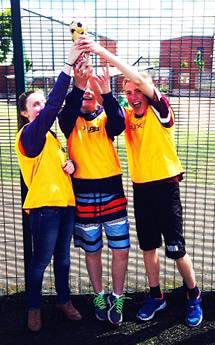 With the grant from FFFC, Warrington Youth Club has been able to support childen on a Positive Life Skills programme over the last 18 months. 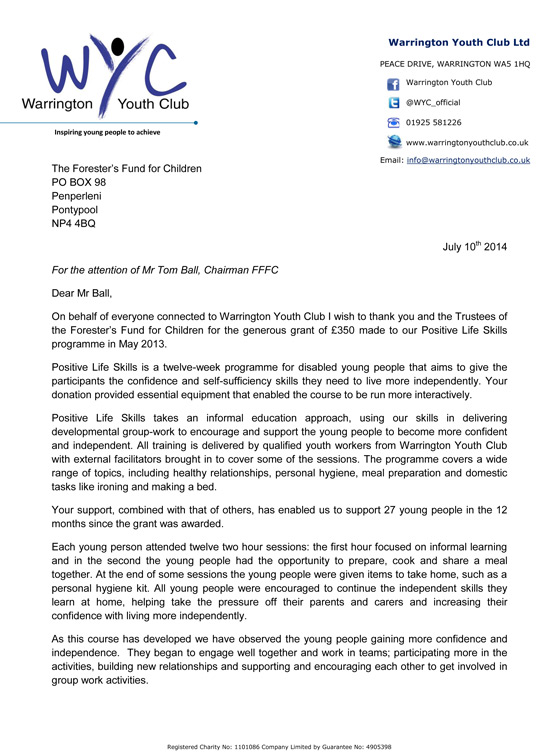 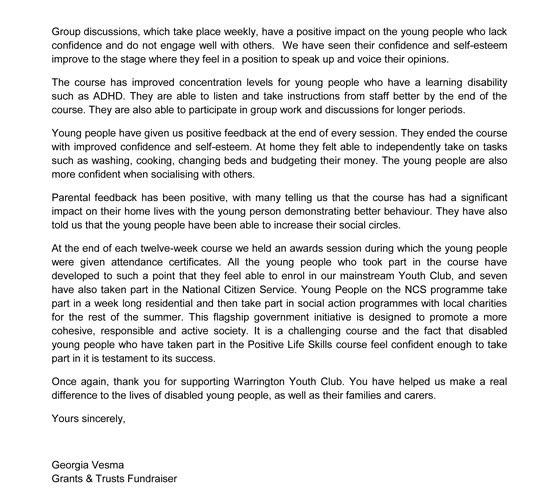 Blanche Nevile School for the Deaf

With the grant from FFFC, Blanche Nevile School for the Deaf have purchased equipment that allows our students, who are all deaf, to experience sound through their eyes. 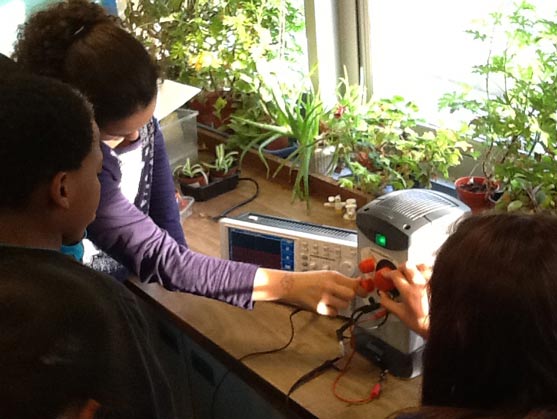 The Harrow 'Kids Can Achieve' have completed an outside garden project which is being used and enjoyed by the young people every day. FFFC's grant was used specifically to purchase some play equipment for this outdoor area including some bikes for the children to ride around the track. 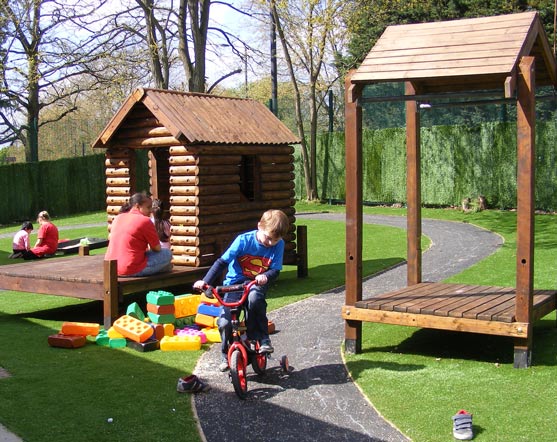 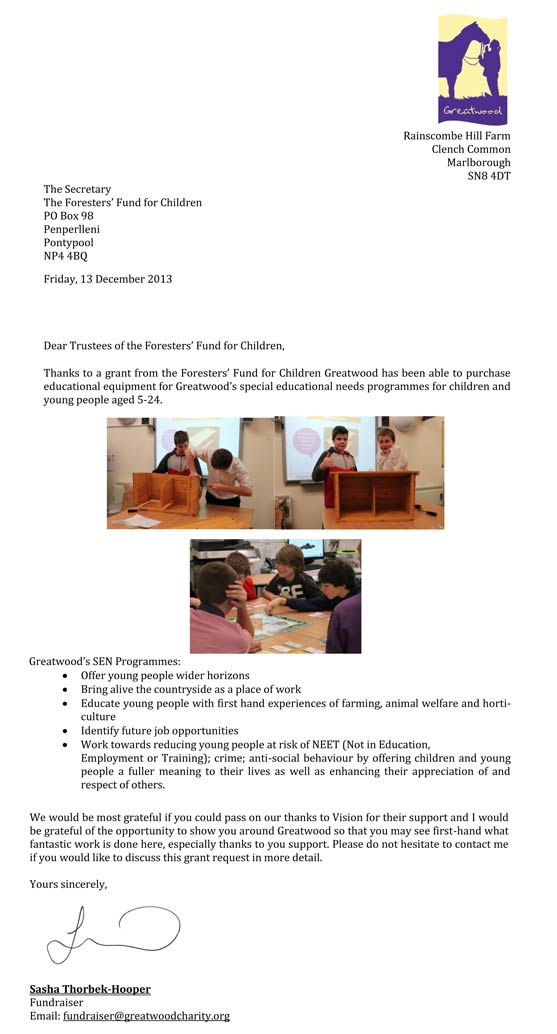 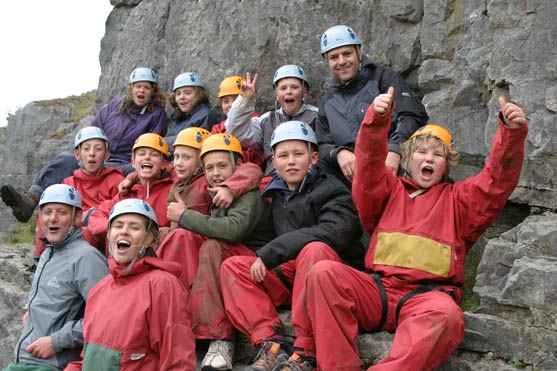 The Youth Adventure Trust is a charity working with vulnerable young people aged 11 to 14 years, established in 1992 by David Hempleman-Adams and Major Richard Mitchell, both well known for their Arctic, Antarctic and mountain climbing expeditions. Their Youth Adventure Programme is an outdoor youth development course that provides young people with a chance to try new things and challenge themselves and enables them to experience success, learn to go beyond their own expectations and grow in confidence. It is a series of residential adventure camps and day activities over three years, where young people have the chance to take part in a range of activities, work in a team, experience group living, challenge themselves in a new environment, and is provided completely free of charge to the young people who take part. One attendee was Sam, diagnosed with ADHD during his Primary School years and had always struggled with the structure of the school environment. At Secondary School he struggled even more with the structure, rules and expectations put on him and during his first year he was identified as at risk of permanent exclusion due to his disruptive behaviour. He felt very negative and disinterested and he couldn't see any point in being there. Referred to The Youth Adventure Trust by his Head of Year, Sam threw himself into all the activities with enthusiasm and learned how to manage his behaviour to ensure it was appropriate to the situation. He says "The camps helped me be better at working in a group. I used to hate that but I don't mind it anymore. I learnt about just getting on with people even if you don't like them that much. I'm not getting into trouble so much at school now and I think about what I want to do in the future now more too. I loved all the activities and being outdoors at the camps. I'm definitely going to volunteer at a camp when I'm older, and I'm going to raise money for the Trust too cos it's really important that it keeps going. It's really good, it kind of inspires you, shows you the way forward." 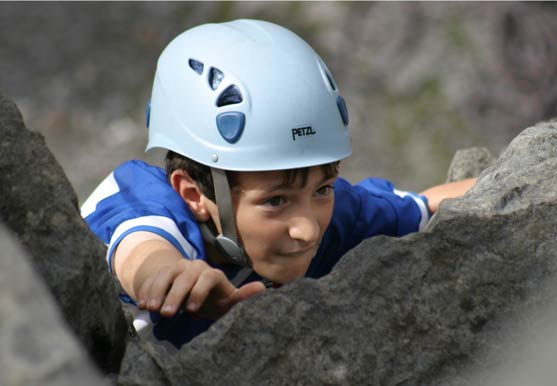 A Nottingham-based charity that supports babies and pre-school children with conditions such as cerebral palsy that cause motor disorders or motor development delay. We also run specialist projects to help children with Down's syndrome improve their communication skills. We work closely with both the children and their parents to encourage and motivate each child's desire to achieve tasks. At the same time, we give parents the knowledge, confidence and strength they need to cope with their child's disability and understand how they can help. To find out more, visit the website: www.schoolforparents.org 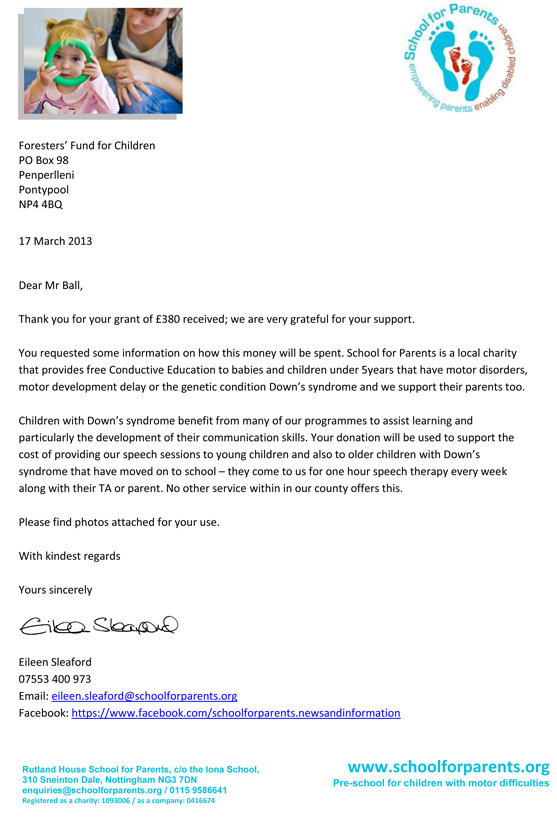 We have helped Birmingham Children’s Hospital:

FFFC and Vision Publications supported the Birmingham Children's Hospital Cardiac Theatre Appeal with a grant in 2010. 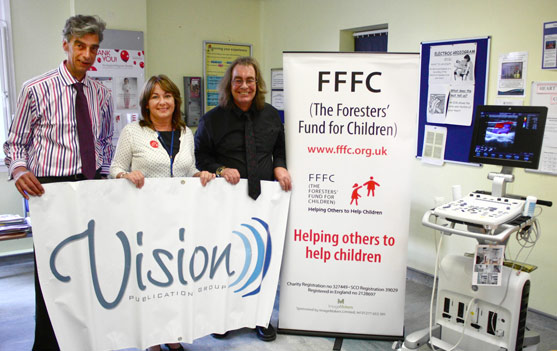 At the time, The Trustees of FFFC were pleased to be able to support the appeal made by the Birmingham Children's Hospital who were renovating their Cardiac Theatre and pioneering new heart treatments for babies and children.

Tom Ball, Chairman of FFFC, went to the hospital to see the machine, which has been sponsored by donations to FFFC and by a separate donation from Vision Publications (FFFC's corporate partners) for a sum totalling £3,364.

Dr Oliver Stumper demonstrated the piece of equipment (which is a Peripheral Vascular Ultrasound Probe) and which is used to trace and identify tiny and intricate veins and blood vessels in a child. Any malfunctions or imperfections may then be corrected by surgery or other procedures. 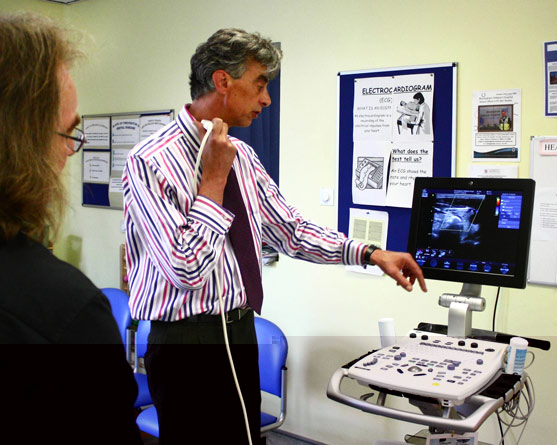 Tom said: 'When I viewed the work that this equipment is capable of, I am convinced that the FFFC Trustees have made good use of the generous donations made to us directly and, of course, donations made to us by those businesses who have advertised through the Vision Publication Group's magazines.

This cardiac facility will help significant numbers of children for years to come.

I also have to say that without the direct donation of £1,907 made to us by Vision Publication Group, outside of their contractual obligations to FFFC, it would not have been possible for us to issue this grant.

We are so grateful to the owners of Vision for their help.

Although the main aim of FFFC is to aid small children's charities and groups which often fail to attract financial aid from other sources, in the case of Birmingham Children's Hospital, however, the Trustees felt that the pioneering techniques made possible by this equipment may be duplicated all over the country as they develop from this new facility, and so very much justifies this particular grant'.

In 2011, FFFC were able to support the Birmingham Children's Hospital with a further grant which went toward the setting up of a sensory garden.